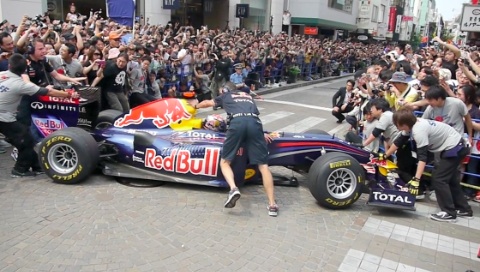 I think, Red Bull seems to make an effort to allow excite things
to take root in Japanese Society.
For example, Air Race is not famous in Japan,
but they are keeping to cary Air Racer every year,
and make the stripe in Japanese air at their sponsored music event.
In this year, they carried their F1,
and demonstrated at not only the event
but a pubric way for Japanese Eathquake Disaster Charity.

I surprised that GoPro HD shop-bought camera was put on F1
as the on-board camera :-)

This week is very important for Red Bull Racing between Monaco and Canada Gp,
But Buemi showed us his genuine hospitality
with highly safety conscience by his driving.
I paid a donation again, and got a can of Red Bull to pay my respect.