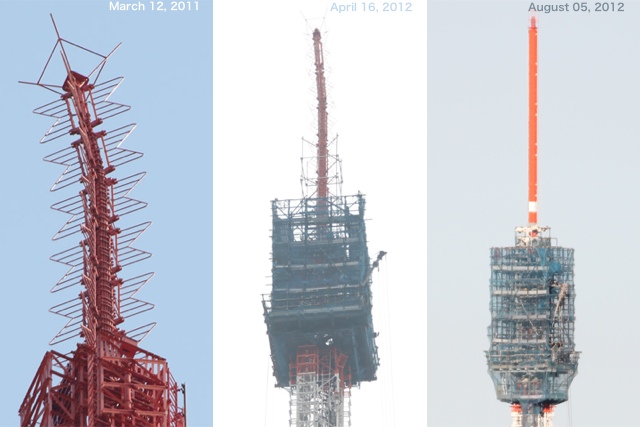 Tokyo tower had been the highest tower in Japan for over fifty years.
It’s not tallest now, but it still be attracted as one of the Tokyo’s landmark.
Last year, the top of the post had bended by Tohoku Earthquake.
After the disaster, our daily life is backed as the recovery progresses.
One year later from the disaster,
Tokyo tower refurbishing was started from April, 2012.
And at last, the post was replaced to straight one at the four months later, August.

I hope that the peace will continue.

When I took the pictures from Roppongi Hills building,
a french couple also took Tokyo tower pictures from the same location.
They did interval shooting to make Tokyo tower with sunset timelapse movie.
They would upload it to their beautiful traveling website “trip85.com”, they said.
I can’t wait to see their Tokyo traveling movies and pictures ;-)
http://www.trip85.com